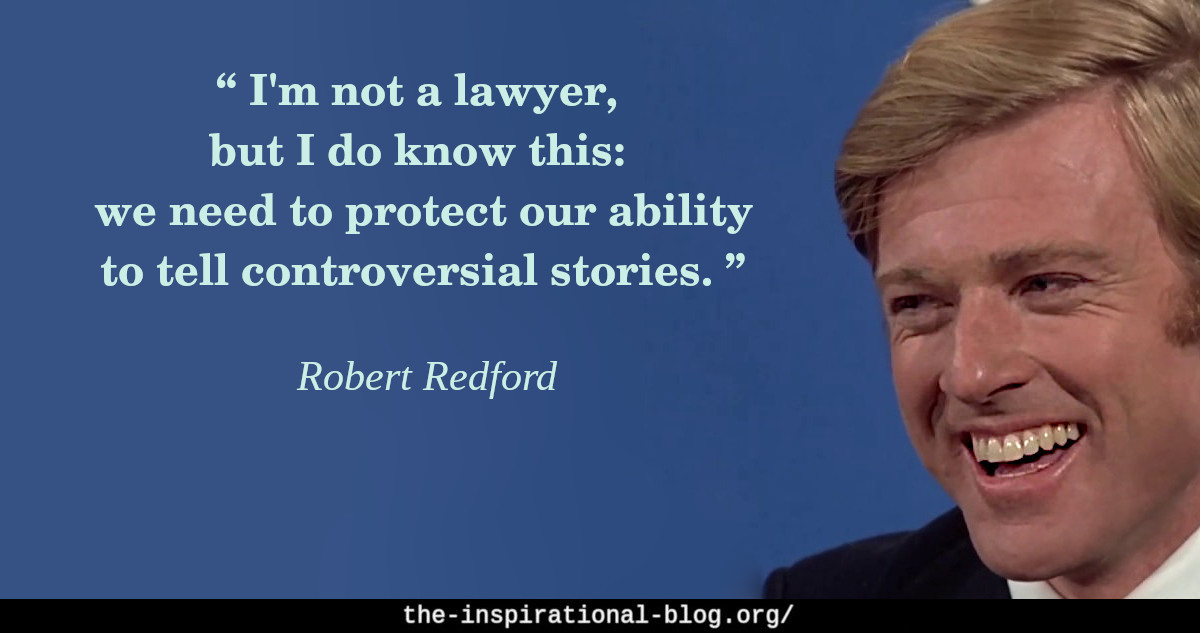 “ I'm not a lawyer, but I do know this: we need to protect our ability to tell controversial stories. ”

Charles Robert Redford Jr. (born August 18, 1936) is an American retired actor, director and activist. Throughout his career, he has won several film awards, including an Academy Award for Lifetime Achievement in 2002. He is also the founder of the Sundance Film Festival. In 2014, Time magazine named him one of the 100 most influential people in the world. In 2016, he was honored with a Presidential Medal of Freedom.


Redford is an avid environmentalist and is a trustee of the Natural Resources Defense Council in America. He also supports Native American rights, LGBT rights, and the arts.


Politically he seems somewhat eclectic. He has supported Republicans, including Brent Cornell Morris in his unsuccessful campaign for the Republican nomination for Utah's 3rd congressional district in 1990. Redford also supported Gary Herbert, another Republican and a friend, in Herbert's successful 2004 campaign to be elected Utah's Lieutenant Governor. Herbert later became Governor of Utah. Redford is the first quote on the back cover of Donald Trump's book Crippled America (2015), saying of Trump's candidacy, "I'm glad he's in there, being the way he is, and saying what he says and the ways he says it, I think shakes things up and I think that is very needed."


Yet he endorsed Democratic President Barack Obama for re-election in 2012. In 2019, Redford penned an article in which he referred to Trump's administration as a "monarchy in disguise" and stated "It's time for Trump to go." Redford later co-authored another article in which he criticised Trump's handling of the coronavirus pandemic.


What is your opinion on this Robert Redford quotation?


Get Paid To Take Photos,

I am an affiliate for this item. That means that if you purchase it through my link, I earn a small commission from the vendor at no cost to yourself.
This money helps me to keep this website free so I thank you for your support.

But first, while you're here, why not subscribe to my free Weekend Review and grab your awesome free bonuses?
(opens in new window)