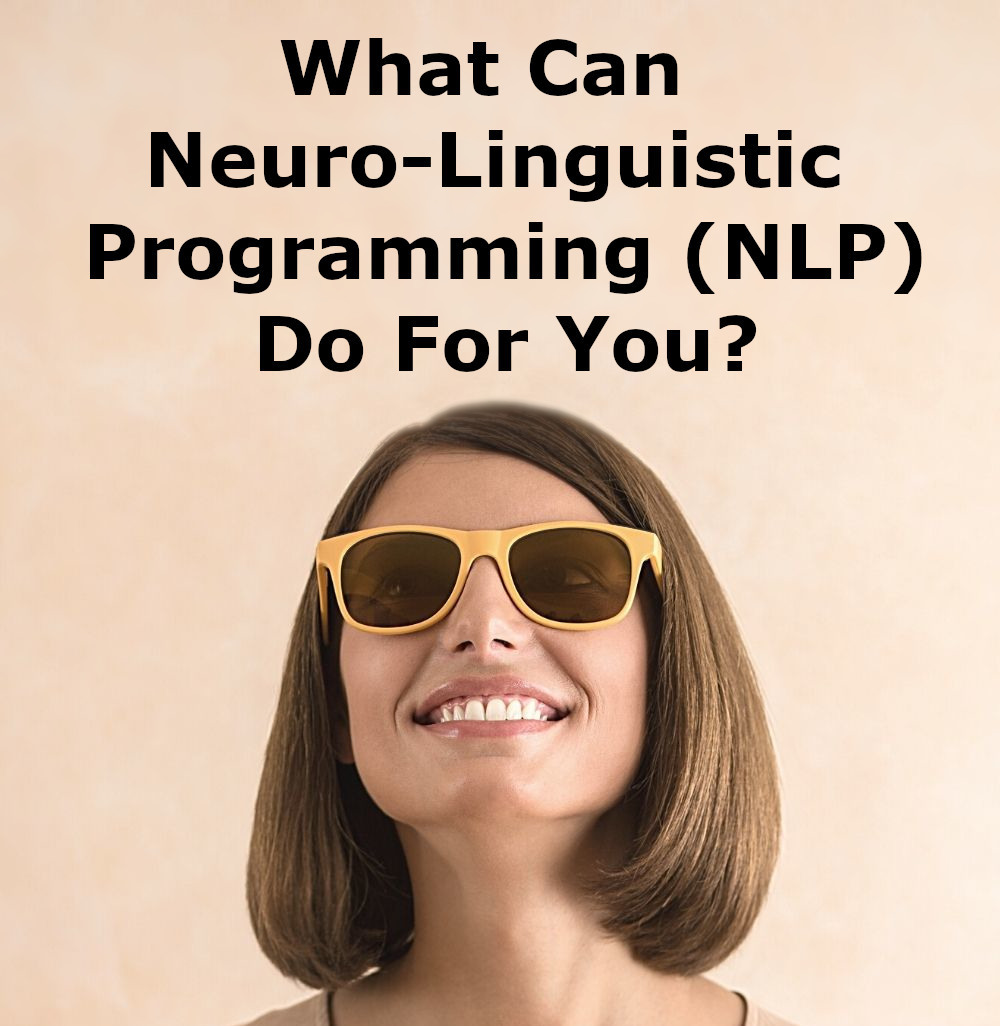 What Can Neuro-Linguistic Programming (NLP) Do For You?

“It is the art and studied science of personal excellence. It as an art in the way that everyone tends to bring their own very personal and unique style and personality to the actual process and thus every practitioner will view the subject somewhat differently and personalise how they work with the techniques of NLP and studied science in so much that there is a definite method and process for discovering the patterns used by outstanding people in any given field to achieve outstanding results. It is also widely regarded as ‘the modelling’ of human excellence.”
– John Grinder – NLP founder

What exactly is NLP anyway? Let's start by looking at what it is not. NLP is not a form of hypnosis although it is often used in conjunction with hypnotism. Nor is it a form of counselling. So what is it? There are twelve different aspects to NLP, known collectivly as the Meta Model, and I will be examining some of them in more detail in outher articles. One of these aspects is Modeling, learning to do something better by watching someone who does it better than you. It's an old idea but NLP takes it to a whole new level. What another can do, you also can do, but you will need to copy every aspect of it, not just the obvious, superficial things. I will explain more about what I mean by this in a minuite.


NLP was first devised as an alternative school of psychotherapy in California, USA, during the mid-nineteen seventies. It was invented by John Grinder, a linguistic professor, and Richard Bandler, a mathematician, at the University of California at Santa Cruz, in America.


Bandler specialised in computer science and was busy transcribing some audio and video seminar tapes of Fritz Perls, the inventer of Gestalt Therapy and also Family Therapy. From this Bander learnt that he too could achieve similar results by coping Perls' methods. From this he started running a Gestalt Therapy group at the University.


John Grinder was an associate professor of linguistics at the same university and became intrigued by Bandler’s new found abilities. He was reputed to have said to him, “If you teach me to do what you do, then I’ll tell you what you do”, or something like that.


Grinder was soon getting the same results as Bandler and Perls, just by following their model. Grinder and Bandler went on to refine the process into what we now know as Neurolingistic Programming. They went on to write their first NLP book, The Structure of Magic, which was published in 1975. It was subtitled A book about Language and Therapy and actually introduced the first NLP basic model, the Meta Model, which consists of twelve language patterns. It takes the form of twelve questions which are designed to challenge and expand the limits of a person's model of the world. This is the same model now widely used in Life Coaching.


NLP is based around a simple enough idea, that by careful and focused study and analysis of successful people, in any field, it is possible for anyone to achieve the same results. For example, if you want to be a first class golfer, you would model someone who is excellent at the game, someone like Tiger Woods. You would observe everything they say or do precisely, not just how they swing a club but everything. You would interview them and ask pertinent questions in order to understand exactly what is going on in their minds. By doing this, anyone should be able to create a template for success that anyone could actually use and achieve comparable results.


The Meta Model is based upon the principal that we don't operate on the world directly. Rather we take in information through our five sense organs and using the three universal modelling processes of distortion, generalisation and deletion, form an internal representation in pictures, sounds, feelings, tastes and smells. The maps that we make in our minds are not the world itself but an internal representation of it. Alfred Korzybski, founder of General Semantics coined the phrase, The map is not the territory.


This fits in with the work of the accomplished linguist Noam Chomsky who realised that our internal map will always be incomplete and largley inaccurate because our preceptions are often, if not always, distorted, deleted or over-generalised by our linguistic and neural filters. This leads to people mistaking their distorted map for outer reality.


Bandler and Grinder then went on to model Milton H. Erikson, the world famous medical hypnotist. Through this work they discovered an entirely different set of language patterns, the Milton Model, which they published in their second NLP book, Patterns of the Hypnotic Techniques of Milton H. Erikson MD.


The partnership between Bandler and Grinder ended abrupty in 1980. The split wasacrimonious and ended in mutual lawsuits several years later, in which they contested the property rights for NLP and ownership of the Society of NLP. They both continued to be active in the field of NLP.


Grinder went on to develop New Code NLP, incorporating many of the basic principles with the shamanistic writings of Carlos Casteneda. He has created many new forms of patterns and techniques including Perceptual Positions.


Since then Anthony Robbins has brought NLP into popular culture with his books Unlimited Power and Awaken the Giant Within.


So what can NLP do for you? Here are some of the areas where it is most effective:
Personal development
Enhancing Creativity
Increased performance
Improved communication skills
and
Accelerated learning


By guiding a person to review his or her current thought patterns, skills, behaviour and linguistic patterns and by discovering personal patterns and removing self-induced limits, new levels of awareness and personal effectiveness can be achieved. NLP works well when used alongside Life Coaching, most forms of counselling, hypnotherapy and therapy in general. It is also an incredibly useful skill to use when working in any form of Holistic Therapy. The easiest way of explaining NLP is to say that it is a type of Applied Psychology.


To understand NLP better let's take a look at the term itself.


Neuro relates to neurology, the way in which we receive information from our five physical sense. It also refers to how we process that information in the brain and nervous system. We humans experience the world around us through our five phisical senses: sight, hearing, touch, smell and taste. By the very nature of the vast amount of continuous information flooding our senses, we consciously or unconsciously disregard that which we feel has no importance to us. We then tend to filter the remaining data based on our past experiences, values and our own personal belief systems.


This form of storage and retrieval leads to us frequently ending up with incomplete and inaccurate data which has been over generalised, distorted or completely corrupted. This filtered information then goes on to form the basis of our internal map of reality where it determines our ‘our state of being’, physically, mentally and emotionally. This, in turn, influences the decisions we make and the actions we take. So as you can see it's pretty important stuff.


Linguistic refers to the use of language systems. By language systems we do not just mean the words that we use. Rather we are including all the myriad symbolic systems which include gestures, body language etc. We use these to organise, decode or attribute some form of meaning to our internal representations of the world and our ability to communicate at an external and internal level.


Programming in this context refers to the process of information processing and the concepts of computer science. It draws parallels from the process of computing science in the way that all human experience is stored, coded and transformed akin to how software runs on a computer system. Thus by re-installing, overwriting or upgrading our mental software, we can change how we think and consequently, how we act.


By linking up these three terms, we have the full term of Neuro-Linguistic Programming, which is often abbreviated to NLP.


Because it is such a practical skill, with the passing of time NLP has found a firm place in the business community and its concepts and processes are widley used in corporate training programmes. NLP enables individuals and groups to achieve their peak performance in many different areas of their lives including sports, communication, and management.Indeed NLP can change your life and has done for countless people. By studying these principles you will gain many valuable benefits including:
Enabling you to take control of the way you think, perceive, feel and act.
Help you to focus on what you really want in life and how to achieve it.
Improve your communication skills to help you become more effective and productive.
Help you to perform at your personal best more of the time.
Strengthen your connection with others.
Help you become more creative.
Help you to change the limiting beliefs about yourself and the world.
Help you to increase self-esteem and self-confidence.
Help you to increase your ability to form stronger personal and working relationships.
Help you to increase your focus on accomplishing your professional and personal aims, goals and ambitions.
Help you to manifest your dreams.


So what are you waiting for? Start studying NLP today. A whole new life awaits.


What is your opinion of NLP? Have you studied it before? How did it help you? Please do share your experiences.

Awaken The Giant Within:
How to Take Immediate Control of Your Mental, Emotional, Physical and Financial Life
by Tony Robbins


Get qualified / certified
as a hypnotist or NLP practitioner

I am an affiliate for these courses. That means that if you purchase through my link, I earn a small commission from the vendor at no cost to yourself.
This money helps me to keep this website free so I thank you for your support.

But first, while you're here, why not subscribe to my free Weekend Review and grab your awesome free bonuses?
(opens in new window)