" Nearly all evil is caused by fear. Try to find out what fear or insecurity is eating into that person's heart. "

All so-called 'evil' is rooted in fear and insecurity. People do bad things because they are scared. Before judging people try to find out what fear or insecurity is eating into their hearts. If all our actions were based in love instead of fear what a wonderful world this would be.


Another way of saying this is to ask whether our motivations are moving us towards what we love or away from the things we fear. Usually it's fear of poverty or the idea that maybe we won't be able to pay our bills. You don't have to be poor to think like this. Rich people are scared of loosing their wealth.


Do you want a private island and a corporate jet so you can invite the people you love and make them happy? Or are you frightened of them looking down their noses at you because they think you're a looser?


Perhaps the ultimate poverty fear is to end up sleeping in a shop doorway. Is your greed motivated by that fear? Or maybe you don't want to have to struggle all your life the way you saw your parents struggling?


Or maybe you're disabled and you know that as long as you remain crippled people will care for you and look after you. Are you scared of having to care and look after yourself? That's a biggie and people will call me cruel for saying it, but our bodies are only reflections, outward manifestations, of our minds. Your mind is perfectly capable of manufacturing whatever physical condition it thinks will ease the fear. I'm certainly not saying this is true in every case, there are other causes of disability too of course there are.


Or maybe you're fat or ugly or in some other way unattractive. Did your parents have a difficult relationship? Are you scared of getting into a relationship and it going the same way? One of the main ways, in our present society, a man can make himself unattractive is to remain poor. Is your poverty caused by your fear of relationships?


It can also be the fear of missing out in other ways. Fear of disapproval is another big one.


A big word we hear a lot these days is 'Islamophobia'. That's a typical Orwellian Newspeak word where we demonise people for being afraid. Shouldn't the group that is feared, whatever group it happens to be, go out of its way to demonstrate that they are not a danger to anyone? Wouldn't that be better than demonising the people who fear them?


I believe that most of the people, most of the time, are acting out of fear. In other words they are moving away from what they don't want instead of towards what they do want. So far every 'evil' action I have identified can be traced back to some kind of fear. But I am not arrogant enough to believe that I have thought of everything.


There is also the nature Vs nurture argument. How much 'bad' behaviour is hard wired into our genes? So I am not arrogant enough to say all evil is based in fear, only most.


Why do people hurt other people instead of helping them? Sure there are psychopaths who lack compassion and empathy but not many. Mostly people are acting out of some fear (rational or irrational). It could be the fear of poverty, of loosing respect, being considered a looser, of leading an unfulfilled life, of being unloved, of being shamed, of missing out on something, of being used.


Many people are scared of relationships because they don't want to repeat the mess they saw their parents getting into.


There are a huge range of things people move away from. Many of our deep rooted fears are acquired very early in childhood. Maybe we are scared of going home with a bad school report.


So are psychopaths born or are they created by their early childhood experiences? Is it the same answer in every case? Until I know the answer to this question I will continue to say 'most' instead of 'all'.


If only we could take the fear of each other's hearts. If we could make sure that everybody has enough. I'm not talking about some heavy handed socialist government, that's just exchanging one oppressor for another. I'm talking about peer to peer generosity.


Of course none of these self sabotaging fear based strategies are conscious. We are not aware of them. We think we are just victims of bad luck. As Carl Jung said "Until you make the unconscious conscious, it will direct your life and you will call it fate."


But what if our main motivation was to help everyone we met to thrive, to make them feel they were looked after, physically, and emotionally, nobody would need to fear. We would live in paradise.


If we could just support each other, make each other feel loved and secure, we would change the world. 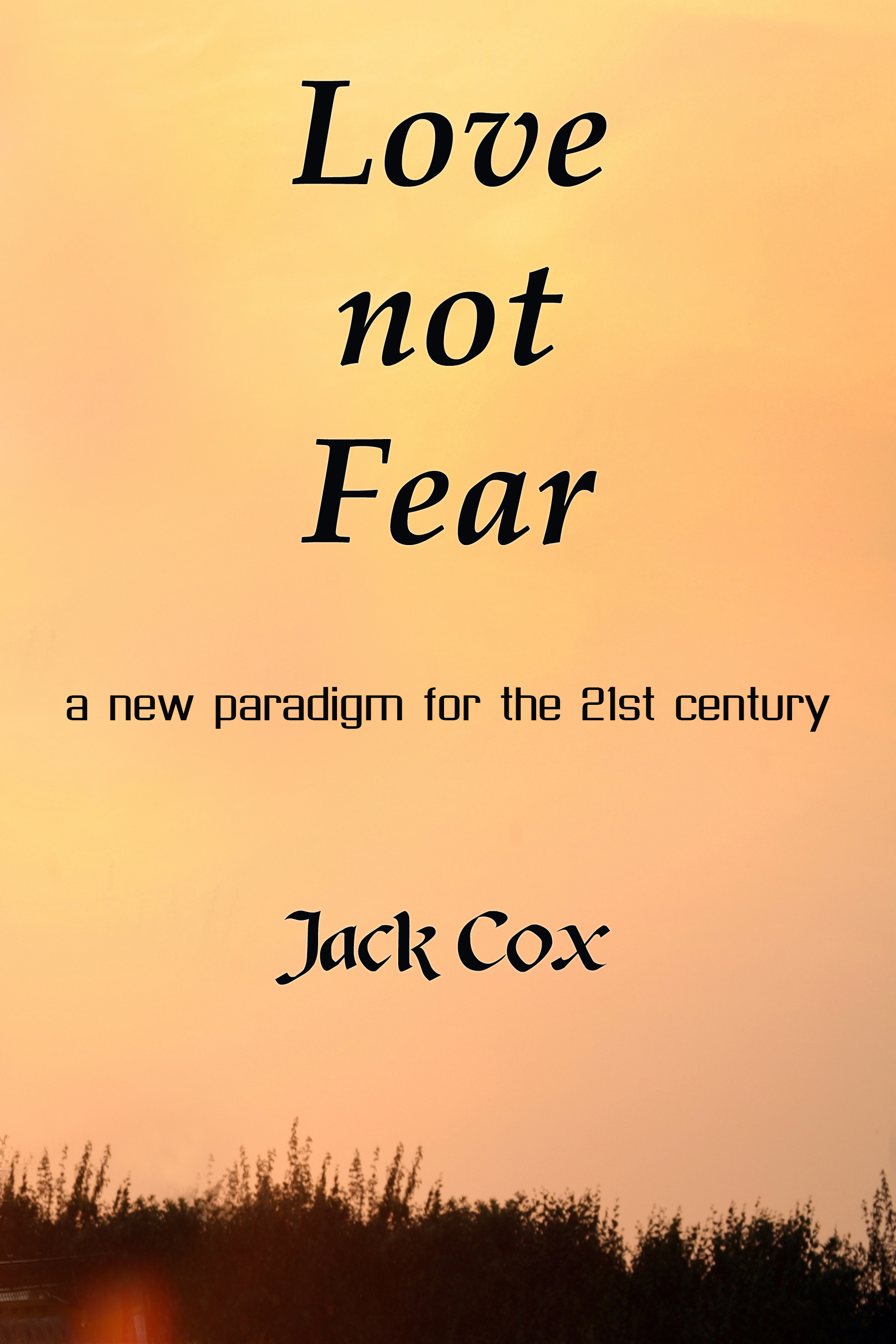 Love not Fear:
a new paradigm for the 21st century
by Jack Cox